You: Huh? What does your name mean? What does it have to do with research?

Why the name 'Bellini Slushie?'

If you’re wondering what exactly 'Bellini Slushie' means or where it even came from: don’t worry, you’re not alone. The name Bellini Slushie was a happy accident.

Tzeying and I worked together in an innovation lab and co-owned numerous projects. We used to have joke names for our projects, and we’d use them so frequently they always ended up sticking. The same thing happened with Bellini Slushie.

We used to hang out at a bars after long work days to unwind and brainstorm different side projects. There was a bar around the corner from our office that had an amazing rotating beer menu and fries that I still crave. We were there so frequently that the staff knew our beer preferences and always had a spot for us. So naturally, when we eventually decided to move forward with our unnamed question bank project, we were there. We were brainstorming different names, and one of the drinks on the menu that night was a Peach Bellini Slushie. Voilà 😎 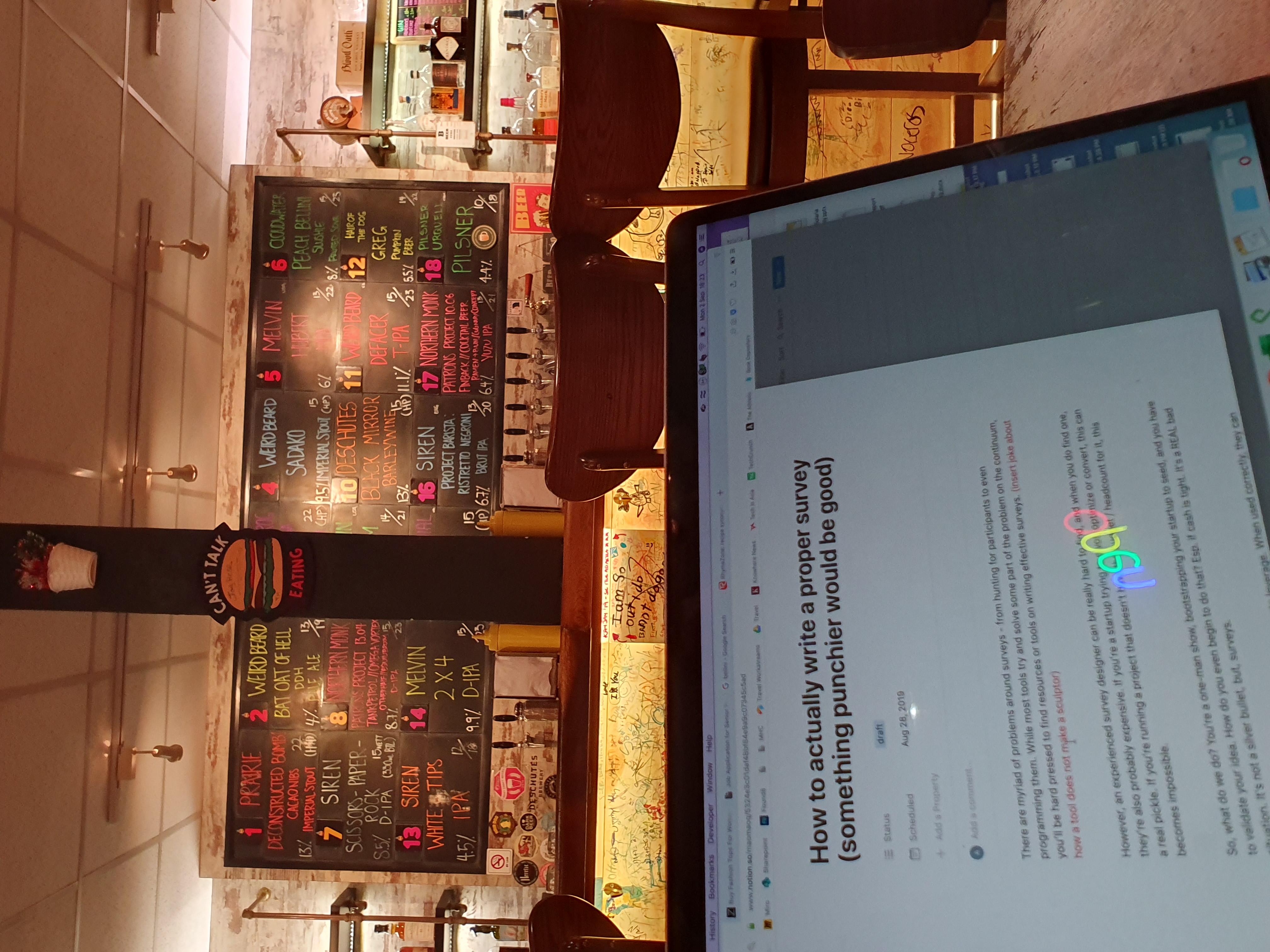 The night we chose the name. Pictured here: I'm writing the outline for one of our first articles. Check out #6 on the menu 😉.

We’re not kidding. As with our history, what started as a semi-joke became reality: our project was officially called Bellini Slushie and we began building the landing page to reflect this. 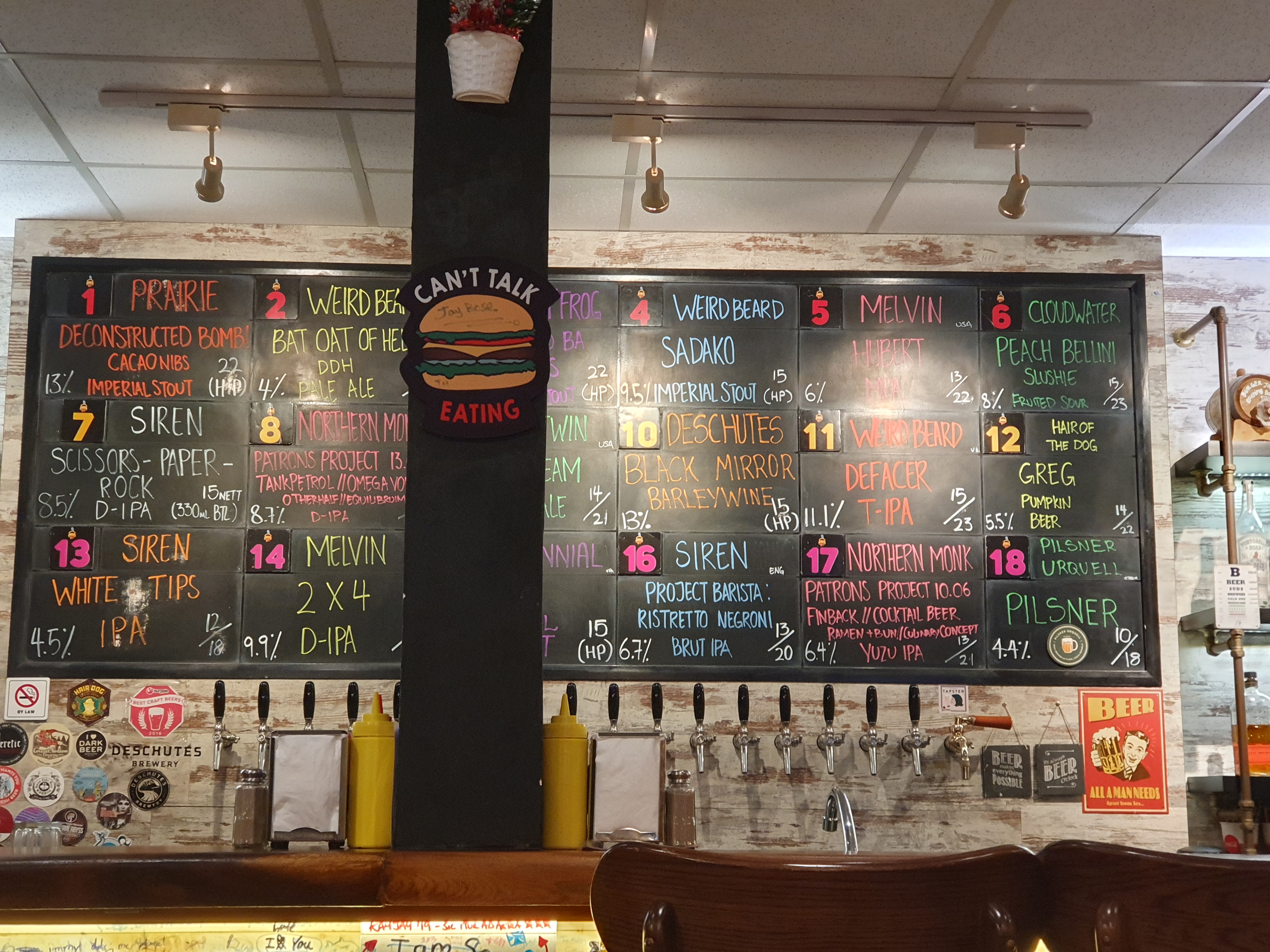 After we decided on Bellini Slushie, I had to take a better picture of the menu. Shoutout to Burger Joint, SG. Especially to their bacon jalapeno cheese fries and rotating beers 😋.

But what does 'Bellini Slushie' have to do with surveying or research?

Nothing! That’s the beauty of it.

The more we used Bellini Slushie, the more it started generating interest. People would constantly ask us why we chose this name and theme for our site. Well, we had to come up with another reason besides, “we were out drinking and saw the name and liked it and it’s kinda just stuck?” didn’t we?

That’s when we discovered the best part of having an obscure name.

We’re not another survey platform, so why should we be named like one?

If you’re familiar with most survey or research platforms, you’ll know that most have names like SurveyX, YResearch, QuestionZ, etc. etc. We love them all, but it can be hard to differentiate between the names. We wanted and now have a name that stands out from the crowd.

Yes, it can be a bit confusing at first, but it’s our job to get you over that confusion.

The great thing about having a different name is that we don’t have to compete with other survey platforms for the main keywords of our site. We can be a little more creative about how we generate traffic.

Because our name is so different, it’s usually one of the first things brought up in conversations. Explaining our name (like in this blog!) is a great ice breaker when we meet new people.

We’ve been referring to this product as Bellini Slushie for 1.5 years - aka the day we started seriously talking about it. Who knows, maybe someday we will pivot the name to make it less confusing. For now though: it suits our needs and we love it, so it’s here to stay.

< Take Me to Question Bank

Liked this? Drop your email here and we'll send you something interesting whenever we can.